After lunchtime today I returned from my second silent weekend retreat at a Catholic retreat center almost an hour east from Memphis on I-40. I was sitting in the sun on the back deck of my parents’ house, doing what I–as an introvert–must do to recuperate after being with other people in silence for a few days: being alone in silence.

I’m inside now but out there, it’s still Shelby Forest in the spring.

And as I sat there trying to add even more reading to my weekend, this Carpenter bee kept buzzing around in circles right around me, occasionally stopping to hang in the air before like a Harrier jet and just stare at me. I shooed it with my book a few times before it finally stopped.

tree with too many seeds

And because I’m the kind of person who always thinks that the wasp that is seen only for a moment before it disappears is now wandering around on my back, not long after the bee left me alone I had to get up out of my chair and do the twist in my reflection in the glass door of the house to make sure the wasp that had floated beyond the boundaries of my vision was not waiting to sting me. This happened twice.

And then after I was seated for a few minutes, I tilted my coffee mug to take a sip and a seed from a nearby tree was floating in it. These seeds are easy to recognize because they are from a large tree close by that spits them out in a little round leaf sort of thing that the wind uses to blow them all over the place. And they do indeed end up all over the place, because, this time of year before the leaves come out, they pop up in clusters of perhaps fifty or so. And there’s hundreds, maybe thousands, of these clusters. It is the most natural example of overkill that I can remember right now.

I dipped my fingers in my mug, grabbed the coffee-soaked seed, and flicked it into the grass.

Not long after that, a little green worm or caterpillar sort of thing fell onto my bright white t-shirt, apparently from the tree with too many seeds at the point where the farthest reaches of its branches extend out over the deck. I sat up, pinched my t-shirt, and gave it one quick tug to send the green bug soaring down between the spaces in the deck. 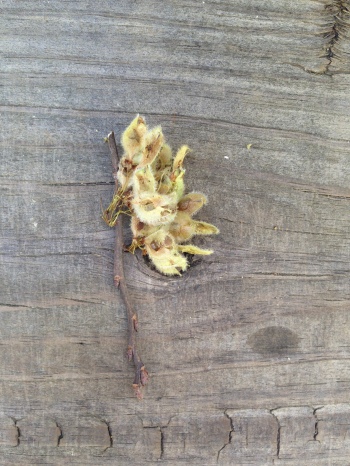 seeds from the tree with too many seeds

It was only a few moments later that the wind blew a stinkbug onto my lap. I remembered that when I was little, I was eating dinner once in the living room. I was notorious for spilling stuff on the carpet, so I must’ve earned some trust by this point. But, whatever food was on my plate, it was the kind that needed two big puddles of mustard and ketchup. I felt something inside my shirt. I looked inside through my collar and saw a stinkbug crawling up my belly. I threw the plate up in the air. I don’t remember, but I probably lost living room eating privileges for a while after that.

I didn’t throw anything up in the air when the stinkbug landed in my lap this time, but I did stand up and I took the eraser end of my pencil, flung it off, and blurted out in frustration, “There’s so much damn life everywhere gettin’ own me!” My accent comes out when I fuss.

The book I had used to shoo the Carpenter bee was one I had taken on the retreat, poet Christian Wiman’s My Bright Abyss (which I have written about before here.) When I picked it back up after getting rid of the stinkbug, I noticed that what I was reading about as I neared the conclusion was the resurrection of Christ.

(I also noticed the furry gray spider right over my shoulder on the railing behind me. The kind that looks like it can jump. But anyway.)

For those who are mindful of the traditional church calendar, today is Easter. A week ago today was “Easter Sunday,” but Easter is a season within a season. And, most appropriately, the season that the season of Easter falls within is, of course, spring. When there’s so much life everywhere. Much of it getting on me. When I would rather prefer that it wouldn’t.

What Wiman had to say about the resurrection of Christ as I kept reading was met with much appreciation on my end, because I have given serious thought for years–and especially recently–to how we do theology and ethics.

Nobody has been more influential in helping guide my developing understanding of theological ethics than New Testament scholar Luke Timothy Johnson. In his newest book, The Revelatory Body: Theology as Inductive Art, he unfolds his main point, that “Theology must always begin and always find renewal, not with words found in texts, but with the experience of actual human bodies” (3).

The systematic way which so much theology has been done has made the discovery of divine truth deductive science, as Johnson puts it, when it is really an inductive process, and more like art than science.

It’s the way of doing theology that ends up ultimately trying to prove itself all the time–to me, to you, or to anyone else. I’m all for the apologia of hope of 1 Peter 3:15 (which, by the way, we’re only to be ready to give and then to be ready only in case someone asks us to explain not why we believe what we believe per se but the hope that is in us). But, I’m not for apologetics much anymore. It stimulated something in me when I was first beginning to explore theology as a young Christian, but I have realized that articulating theology on the basis of what is rationally persuasive relies so much on so much stuff that is not what is most important: our virtues and values of character, faith, love, relationship, personal witness–all in embodied human experience. It also doesn’t seem to square too much with the idea of a God who, as a resurrected human, continues to be personally and actively present among us in such a way that the first people to make the discovery thought calling it “wind/breath/spirit” was the best way to get at it.

As for how this way of doing theology relates to the idea of arguing for the historicity of Jesus’s resurrection itself, Wiman says that “the whole process of putting faith on trial, the incessant need for an intellectual result, feels false to me. It seems like a failure of vision even to ask the question, much less to get all tangled up in it” (165).

It’s not that the defensibility of our theological assertions isn’t important–it most certainly is. It’s that the how of theology holds preeminence over the what. How we are enabled to see and experience God is represented in Johnson’s favorite way of referring to God/Jesus: “the Living Lord.” The resurrection is not just something that when we have argued our way there, we can be said to have done some good theology. The resurrection is more the how than the what. It is, along with many other things, the means of seeing which saves us from Wiman’s “failure of vision.”

When I read that on the deck after spring left me alone long enough, I chuckled–struck by the magnitude of the statement’s insight (especially in light of what I had been already been thinking and reading), and by the simplicity with which it was articulated.

There really is so much life everywhere.

I underlined this part in my book in red and then leaned toward my coffee mug to take a sip.

There was a fly in it.