In the first chapter of his great letter to the Romans, Paul takes issue with those who by their ungodliness and unrighteousness “suppress the truth” (v. 18). For though “what can be known about God is plain to them because God has shown it to them,” (v. 19) they “did not honor him as God” (v. 21) but “worshiped and served the creature rather than the Creator” (v. 25).

How many times have we read this text as if Paul is tackling the problem of atheism, in spite of the fact that such a conversation in Paul’s day would hardly have been relevant? Sure, there probably was the occasional skeptic who doubted the existence of any deity whatsoever, but for the most part, the gods were a given. 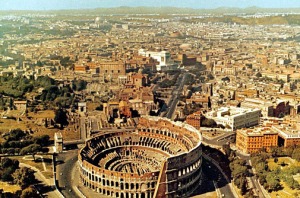 Not so today. Now the question of faith is often centered on the idea of God’s existence itself, and is so often articulated as if it is the end-all, be-all. “Do you believe in God?” one person asks, as a way to check whether or not someone is in the right place spiritually. “You know, he doesn’t believe in God,” mutters one person about another. If he would only believe that there is a God, then he would be set.

This is not at all where the ancient world was, and therefore it is not where the ancient texts of the Bible are either. We post-Enlightenment folks tend to portray Paul here in Romans 1 as arguing that it’s obvious that God exists because of, say, the complexity of the universe, or the fine-tuning of the moon’s gravitational pull on the earth, or something.

However, as Luke Timothy Johnson reminds us, “Paul is not engaging here in a post-Enlightenment argument for the existence of God ‘from design.'” Why not? Because, Johnson says, “His starting point is completely different” (Reading Romans, 33).

What Paul is talking about here in Romans, then, is what Johnson calls the “absolutely critical distinction between knowing and acknowledging” (34).

One of the most valuable lessons I have learned at the intersection of my personal struggles and my study of the Bible is that the question of faith in the Bible is not “does God exist?” but rather, “are you going to be faithful to this God?”

During some rough seasons of doubt, I staunchly believed that if God would just do an overt miracle before my very eyes, the problem of my faith would be solved! If a healing of a paralytic or fire from heaven would make God so intensely real to me, then I would pray with endless fervor, live extremely sacrificially, and, probably in the end become the greatest Christian the world has ever known. Of course.What was God waiting for, then?

Thankfully, the epiphany that eventually came almost knocked me over. The question of faith in the Bible, I realized, is not about believing in the existence of a god, but about being faithful to this God. Time after time, biblical figures are practically certain that the God of Israel exists. It would be hard not to think this in light of some of the undisguised ways this God makes his existence known at times. However, they still fail to really believe in him, and that is the problem. Here we have the central conflict for Israel, and the continuing conflict for the human race. It is faithfulness to God that we need, and it is faithfulness to God that Jesus Christ accomplishes and exemplifies for Israel and the nations.

Notice that when the Bible picks up in Genesis 1:1, God is already and simply there. When the Bible ends at Revelation, God has always been and forever will be, there. In the meantime (“in the now time,” as Paul puts it) the main question posed between Genesis 1 and Revelation 22, is directed at humanity. And this question has not simply to do with the human ability to know that God is, but the human responsibility to acknowledge that we are his.

“The heavens declare the glory of God,” sings the Psalmist (19:1). This doesn’t mean, as it is so often thought, that the heavens are shouting “God exists! God exists!” or even worse but probably more true to fashion, “Some sort of generic God exists!” Rather, in their declaration, the heavens reflect the special nature and the particular glory of their Creator. This is the God who argues with Abraham, who rescues Israel from Egyptian slavery, who enthrones David, who establishes justice and righteousness, and who makes himself known in Jesus. This God does not create humans just to believe that he exists (as if that accomplishes much of anything in itself), but who creates humans to fulfill particular tasks as his vice-regents, his image-bearers, his priests to and for creation. We are his poiema, his crafted piece, Paul tells us, created for good works which he has arranged for us (Eph. 2:10).

Follow Dwellers of the Dust on WordPress.com
Join 31 other followers